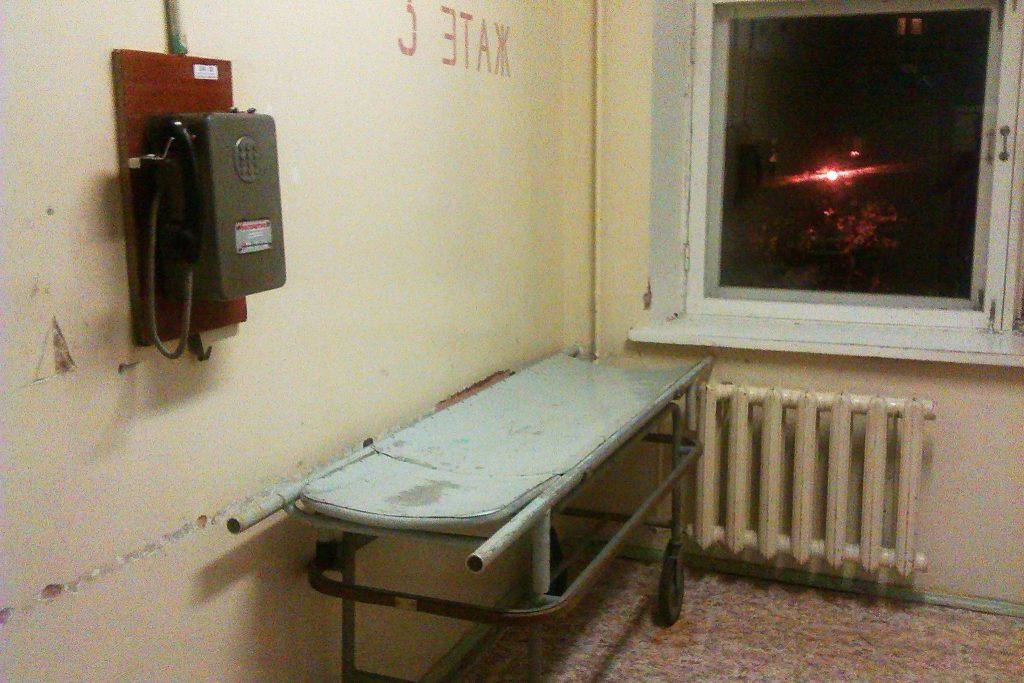 Katya –  still young, but already a very serious nurse. When I was brought in by ambulance and pumped out, it was already late, I missed dinner and kept trying to go to the store to buy food. I might be able to get out, but I don’t think I can get back up to the third floor. So, of course, they wouldn’t let me go anywhere.

– All right, don’t worry, – the woman on duty that night told me. – The girls can work something out.

About 10 minutes later, Katya appeared with a plate. Resting on the plate where two pieces of casserole and a huge piece of cake.

At night, when my blood pressure jumped and the earth swirled around my head like a flock of bees, Katya helped me out again by interrupting my sleep and giving me a happiness pill. The bees flew away.

As it turned out, she really had forgotten about the cake.

And after the third chocolate bar, Katya finally smiled. 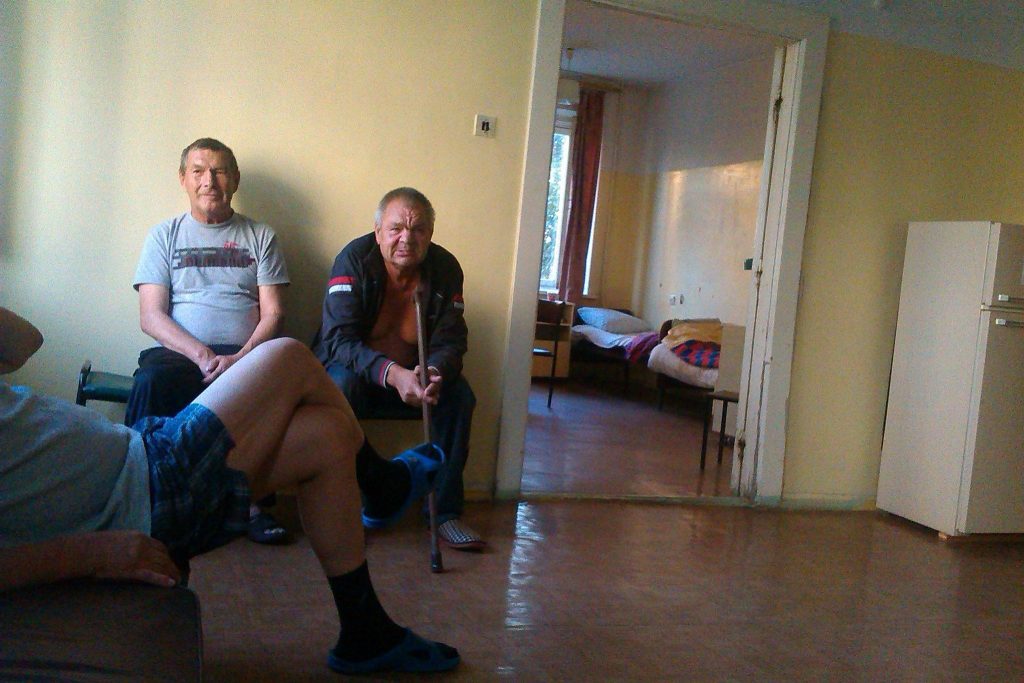 He was wearing a dark blue tracksuit. His jacket was always open, showing off his frail chest. His face was wrinkled, and he walked with a stick in small shuffling steps – like Charlie Chaplin, only smaller.

Every 20 minutes, I noticed, this guy with a stick was trotting along the corridor with amazing speed for his mode of movement in the direction of the toilet – to smoke. The chances that you would see an empty toilet on your way out of the ward were slim. And, as a true postmodernist, he always left behind a roach in the toilet – his trademark.

Here he sits, on the right, waiting impatiently for the next useless 20 minutes of his life to expire – and he will finally be able to have a drag on his cig. 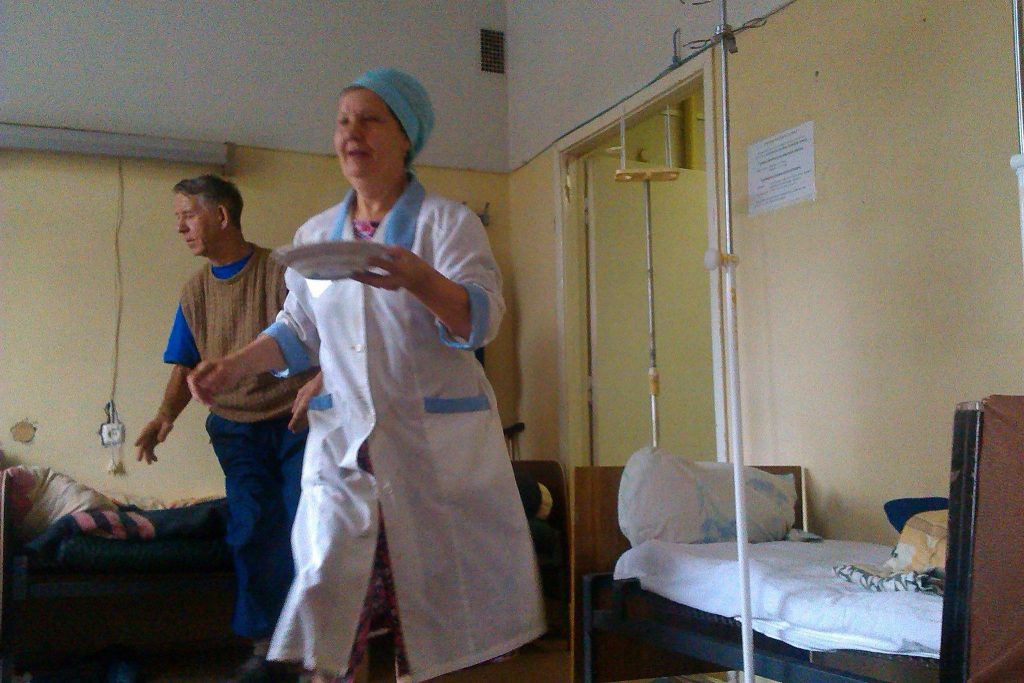 Yuri Andreevich, a former design engineer, was already in this hospital with a stroke six months ago. It should be noted that he suffered a stroke after being admitted to a hospital that did not have a CT scan, so he was being driven across town to another hospital for a CT scan in an old rattling ambulance.

This time, he was undergoing routine prophylaxis here. He is partially paralyzed on the left side of his body, but there is someone to take care of him – his wife visits him every day, and his children call him.

Yuri Andreevich worried every occasion – if nurses will not forget to put a dropper, to remove  a dropper, to do a shot, to feed lunch. He is very well-mannered, always says “thank you”, and his favorite word is “of course”.

– Eat, eat, – he said to me, offering me homemade cakes. – You are here alone, you will lose weight, you need to eat.

But Yuri Andreevich still had one resentment. And not even resentment, but just a sad regret. He is from Yekaterinburg, but after studying he was assigned to Novosibirsk. And worked there for more than forty years, for which he received the title of veteran of labor. And after retiring, he returned with his wife to his hometown, to his children. And now this title – and at the same time all the benefits due to him (we calculated that it was about two thousand rubles) – was taken away. They said he is not their veteran of labor, but belongs to Novosibirsk, and there is no money in the budget for him.

– What am I, from Africa? – Yuri Andreevich asked, reaching the head of the regional Duma in his just indignation.

And now Yuri Andreevich is sitting on a hospital mattress, in a hospital that is peeling like an overcooked egg, and he asks me:

– Where is justice? I don’t feel sorry for the money, but it’s just a shame that I suddenly became a stranger in my own country. And no one else needs me.

And I don’t talk and avert my eyes – I’m ashamed. 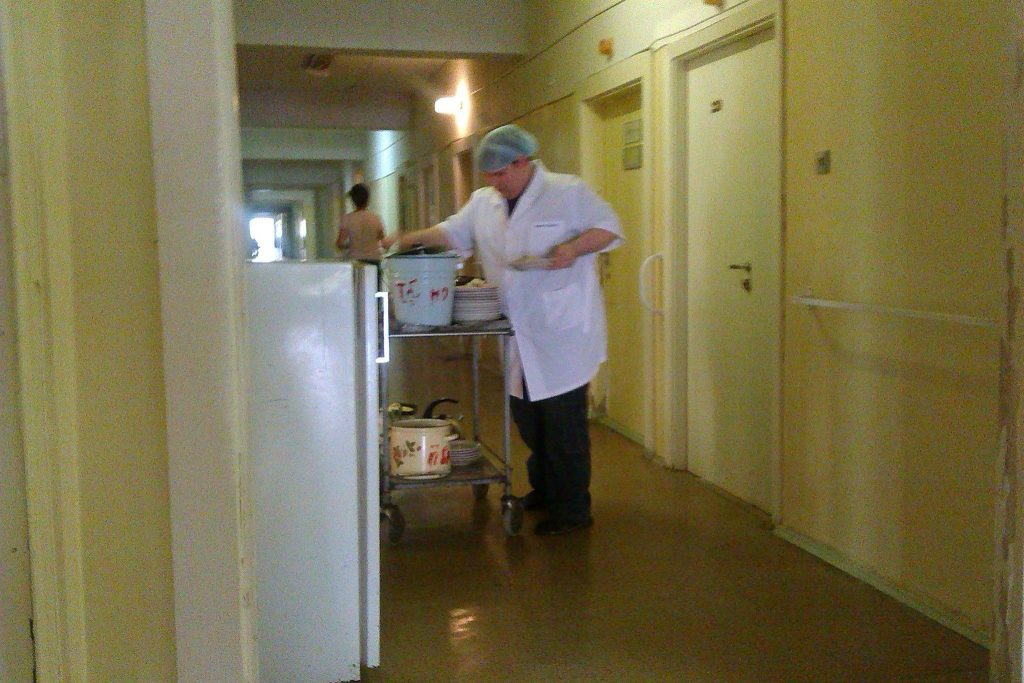 Sergei is under 60, but he has enough energy for two 30-year-olds. He doesn’t take care of himself at all, runs around the city like a squirrel, and only goes to the hospital for procedures. Worked as a fireman, then turned to plumbing.

He loves his job. Once he was taken to a cardiology clinic in an ambulance. He thinks that if they had taken him to an ordinary hospital like this one, he wouldn’t have survived. And there he was immediately operated on, and, what he particularly emphasizes, for free. Now he went for prevention at the place of residence.

– We generally moved to another district of Yekaterinburg, but I have not yet re-signed. The  district, by the way, is dangerous – there is still a drug addict on a drug addict. Well, we live.

He told a story about his  father-in-law renting out his 3-room apartment.

– The father-in-law rents out all 3 rooms, and he sleeps in the kitchen. He cut off the batteries there – why, he says, will I pay for extra heat? Now he is suing the housing Department to reduce his utility payments.

-Two girls recently rented rooms from him. They were not allowed to wash more than twice a week, because he was saving water. He washed their dishes himself, for the same purpose. There is no TV in the apartment – it costs money and eats the light. And of course, the tenants are running away from it, always looking for new ones.

– Laugh all you want, – continues to tell Sergey , – but he saved up a lot of money this way. Once he invested in “MMM” (*russian defunct pyramid scheme) – started a notebook, counted millions, bragged to everyone until lost everything. Then he invested again and lost again. So he lives, saving up, saving up, and he looks like a bum. His relatives didn’t see a penny from him. “For you”, -he says, -” I try, everything will remain for you.” And I told him:  you should do good deeds when you live, then you will have time to hear “thank you”. For two months, I tried to persuade him to borrow money for a car. I tell him, that I’ll drive him when he will need to. Well, he did. He gave me half a million without giving it back, can you imagine? He didn’t give it to his daughters, but he gave it to me.

– Once about ten years ago, he came to get a job and when he heard from the man who interviewed him that he was too old, he stood on his hands upside down and asked: “Can you do that?” They didn’t take him anyway. And he still douses himself with cold water every day, exercises, and walks in the morning.

– And he also has a hobby  – he is constantly suing someone: housing, neighbors. Everyone’s tired of it. And he lectures everyone on how to live life properly. None of the family except me can no longer communicate with him. He is already 87 years old. 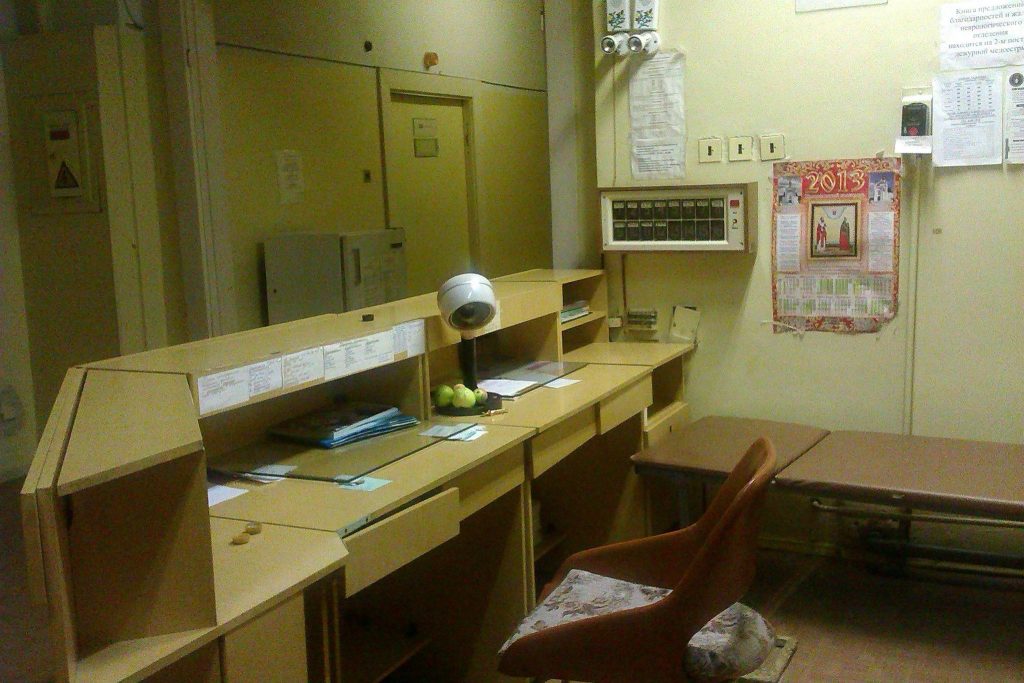 Procedural sister Masha does not like to be nervous. No one likes it, but she especially does not.

– Don’t ask me anything. You start asking questions, and I get nervous instead of focusing. If I prick you in the wrong place , then what?

I bare my buttock and get my shot. Masha begins to prepare an I.V.

– There was one before you, a madman. He keeps asking and asking, and he’s driving me crazy.

Then, of course, we became friends and Masha started talking. There’s one doctor she doesn’t particularly like, but she likes to talk about him.

– Recently he wanted to surprise us all – and got married. So what do you think? His wife got away from him three months later. Why not get away from such man?

– He also likes to drink. When he is just hangover, he tries not to approach the sick and make questions from: “How are you,  how is your health?”

– They even took his car because of it, and now he rides a bike.

The sisters – they see everything, they know everything. Only the nurses know more than them. 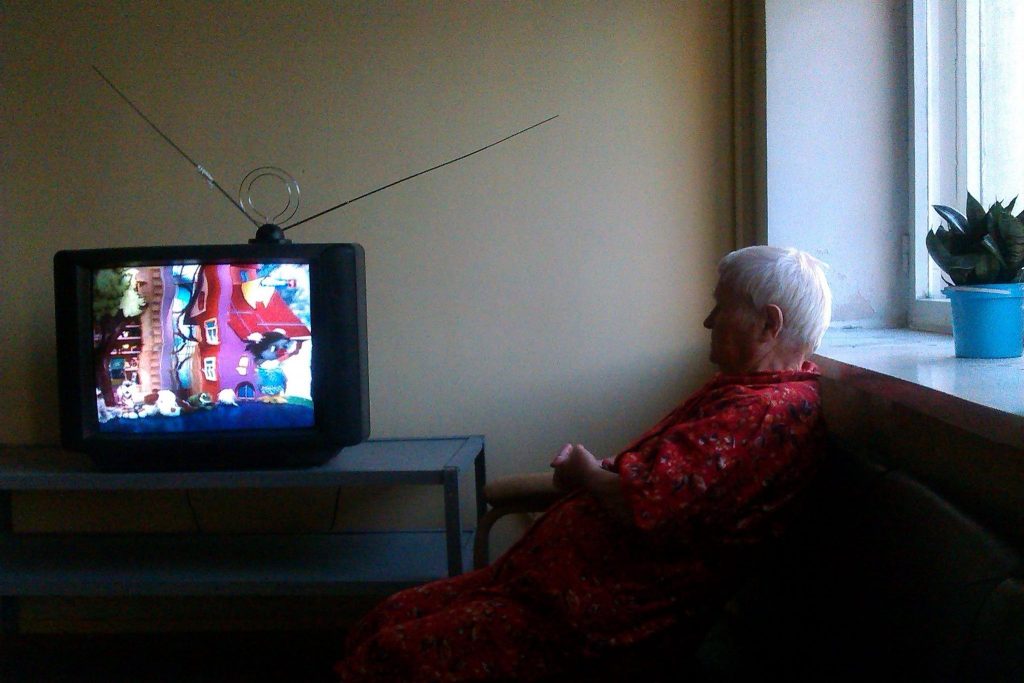 I called this old lady, white-haired as a thick dandelion, the General. It wasn’t  for nothing – she hasn’t lost a single battle for the hospital’s only TV set. Everyone knew that it was useless to try to storm the TV at  5:30 p.m. and 7:30 p.m. “Is our old lady on duty again?” – one patient asked another. “On duty, of course.” And they both smiled underatanding at each other, like people united by a common history.

– And about love, – she replied. – And the murders are there, everything is there.

The succinct phrase “everything is there” probably meant that the film was good.

And at 7:30 p.m. there was another mega-series “Bombers”. It is true that more than one old woman has already watched it, but she was always the first to repel the timid attempts of neophytes who had just entered our hospital Department to turn on another channel.

Here I am writing this text now, lying on a hospital bed, and I know that the General is on duty at this time, keeping her combat watch. And somehow it becomes calmer in my soul. 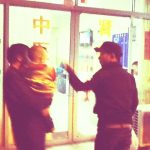 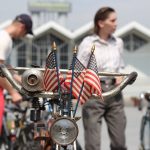